global warming: as more and more people come to understand the threat of global warming, individuals and governments are making efforts to reduce greenhouse gas emissions

What is CO2?
Carbon dioxide is a colourless gas that makes up a minor part of the Earth’s atmosphere – approximately three parts in 10,000. It is formed in the decay of materials, the respiration of plant and animal life, and the natural and human-induced combustion of carbon-based materials and fuels. Carbon dioxide is removed from the atmosphere through photosynthesis and ocean absorption. For industrial usage, CO2 is recovered from lime kilns, flue gases, ammonia synthesis, and other sources.

What is the role of CO2 in the Earth’s atmosphere?
Carbon dioxide is one of a number of naturally occurring greenhouse gases (others include water vapour, methane, and nitrous oxide) that keep the Earth warm enough to support life. These gas molecules absorb much of the sun’s energy that is re-radiated by the Earth’s surface, and reflect this energy back to the Earth as heat. The gas molecules function like an insulating blanket, or like glass panes of a greenhouse, transmitting sunlight but holding in heat – hence the term “greenhouse gases.”

What is the link between greenhouse gases and global warming?
Scientific studies show that a variety of human activities release greenhouse gases. The most significant factor is the burning of fossil fuels for producing electrical energy, heating and transportation. Over the past century, rapid population growth accompanied by rising energy consumption and industrial production have led to higher concentrations of greenhouse gases in the atmosphere. As more heat is being trapped in the atmosphere, global temperatures are gradually rising. Most experts agree that average global temperatures have risen by about 1 degree Celsius over the past 100 years, and could rise by up to 5 degrees Celsius by the middle of the 21st century. 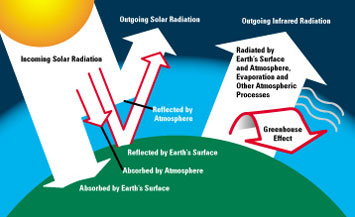 The greenhouse effect image courtesy of Environment Canada. Reproduced with the permission of the Minister of Public Works and Government Services Canada, 2001.

Why is global warming a concern?
If current warming patterns continue and average global temperatures rise even by a few degrees Celsius, the impact on natural ecosystems and human life would be devastating. Melting polar ice caps and mountain glaciers would result in rising sea levels and coastal flooding. Precipitation and weather patterns would change dramatically, bringing extremes of drought and rainfall. The changing climate would alter forests, crop yields, and water supplies, and could lead to famine. Many plant and animal habitats would be threatened, and some species would likely become extinct. As more and more people come to understand the threat of global warming, individuals and governments are making efforts to reduce greenhouse gas emissions. At the United Nations Climate Change Conference in Kyoto in 1997, the major industrial nations agreed to binding targets for reductions in greenhouse gas emissions. Some progress has been made, but much more is needed.